It always seems premature somehow to arise before day has broken. Before that glorious ball of fire that lights and warms the earth sees fit to rise, there is surely beauty in the pre-dawn. A sacred silence before resort workers hit the highway – bound for the altered worlds that irrigation and obscene amounts of money create like worlds contained within themselves.

Missing the daybreak, I am content in conserving my contemplative energy for the sun’s navel as he lowers himself onto his bed of horizon each evening. Whether melting into the sea or flashing green like a strobe, theatrics reign here on the north shore of Hawaii island. Old Lā always bows out in superb style, night after night. Sometimes low clouds obscure his passage, but rays that bleed through streaks and puffs of pink, grey and black slice through these obscurations as if their source is tilting his head back and laughing. Zeus in his chariot pulled by four black horses, necks arched, nostrils flaring, thunders through his sky. He is not daunted, and liquid joy seeps out, around and through. 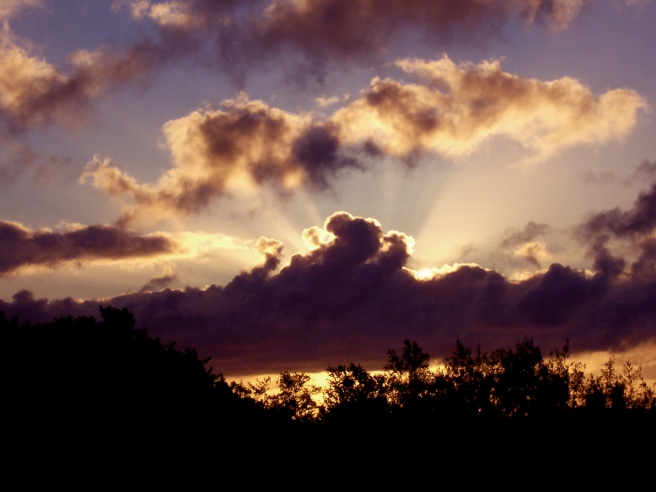 Sunsets have always drawn me into their palette, as saturated colors in a painting are wont to do. Watercolors belong to the dawn – those muted, diluted rosy hues streaked with a wet brush onto pebbled canvas. Living in Maine for thirty-two years, I caught sunrise over the first mountaintop to glimpse the light of day in the eastern United States – Cadillac – but once. It was a cloudy morning, and though fog proves lovely as it spills over Maine’s coastal islands like water over the backs of porcupines, it further muted morning’s hues as if a painter had swished her brushes one time too many in the same glass of water.

Instead my days climaxed in a sun setting over the hills surrounding Goose Pond; eyes dancing with summer damselflies flittering about on gossamer wings, tickling shoulders as we pulled oars through dark water. While beavers settled into lodges after a long day’s work, tails slapping, osprey nestled into the tallest treetops. The buzz of cicadas joined bullfrogs in a nightly serenade that waned with the flair of Venus emerging into darkening skies, gathering less brilliant companions to her flanks until they congregated like bees populating a hive, turning out the sweetest product imaginable.

Stars are the reward for ushering day into night. Last December I witnessed a full lunar eclipse – stepping out, at intervals, into the wee morning hours to photograph and gape, dumbstruck, at what early humans surely considered a portent. It was magnificent enough that I would repeat the ritual without hesitation. But until then, I’m content to sleep until daylight restores my vision and breaks over the land.

14 thoughts on “The Dawning of the Day”