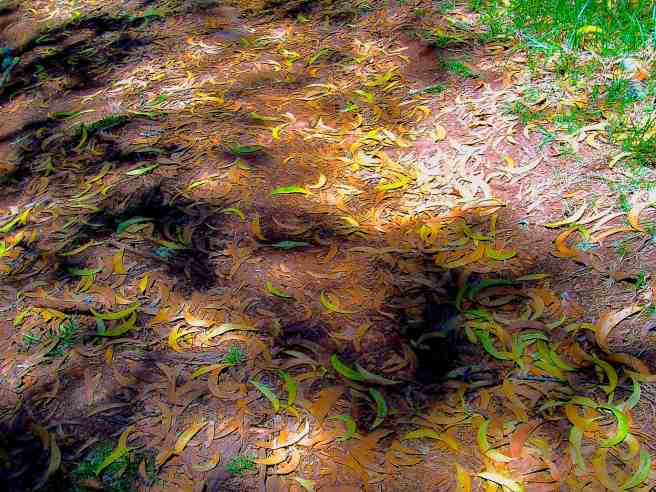 Ever since I was little, I’ve been exploring the underside of things. As a small child, I’d toddle down behind our house in the foothills of the San Gabriel mountains, wading into the stream bisecting a grove of eucalyptus before, that is, it was turned into a golf course. In the water whose level varied with the seasons, I would discover rocks and water bugs and tiny fish trolling about in the rust-colored streambed. It was long before such places became overrun with people – I rarely saw anyone else around. Drawing in the odor of pungent eucalyptus leaves, I’d search until discovering just the right sized branch or twig for poking. Then, crouching down to turn over rocks and chunks of damp leaf mold, the fun began. Worms and bugs and salamanders, not accustomed to the light of day, would wriggle and squirm or wad their bodies up into little protective balls.

Fast forward twenty years and I found myself repeating the same fascinating ritual in the woods of eastern Maine. I don’t know if I experienced some past life, lending me a preponderance for prodding the flipside of things – I only know, at this later stage of the game, it is simply who and what I am – physically, mentally, spiritually. In Maine I would take faith walks in the woods at night; would lie on my back in a canoe for hours, floating freely on the pond, gazing upwards at the star-pocked heavens, pondering the imponderables of existence. Was I searching for something; longing for home? Or was it just that I found the home I had right here on earth infinitely captivating to its depths?

It’s not like I shun the light of day like some vampire. I delight in the daytime and all it offers. Despite my love of darkness and its thrilling, often unacknowledged world – I would be foolish, say, to swim in the ocean at night. It’s when sharks come in to feed. I’m not into tempting fate. And though most owls fly at night, the Hawaiian Pu’eo flies during daylight, sweeping over fog-drenched fields in search of tiny prey. Think of what I’d miss seeing if I only sought the shadows.

I suppose, then, it is only natural that I am a lifetime student of depth psychology. Humanity yearns for the light; Christians and Jews alike look heavenward for their father in the sky. Many Native Americans refer to Father Sky and Mother Earth. Gazing up, we search for answers, for guidance, for ‘higher intelligence.’ Surely life out there must be superior to that which originates down here. Yet the irony for me is that so much wisdom seems to lie right here inside and upon our dear Mother Earth.

University of Cambridge and Harvard educated scientist Rupert Sheldrake is best known for his discovery of morphogenetic fields, or the energetic imprints of all living matter which transcend time and space and are sometimes described as the soul of the world. These energetic fields contain all the intelligence ever derived from all of life, past and present, and may well be what sensitives such as Einstein tap into when discovering something ‘new.’ Perhaps it’s like throwing sticks in the air, and being perceptive enough to make sense of patterns as they fall, seeing an order to things that was previously unrecognized. Like reading tea leaves.

The late “Magellan of consciousness,” Terence McKenna, may best have been known for his experiments with psilocybin mushrooms and might still be marginalized because of it. But he’s always been after something – a fellow mulch-turner, I suspect. Eating fungus tapped him into what he terms the Gaian Overmind, which appeared to him surprisingly, at least once, as that which we’ve been conditioned to believe is extra-terrestrial. This apparition possessed the same features and face of ET; the same large eyes. He had come to believe these beings are not extra-terrestrial; rather they are super-terrestrial, “more or less a kind of integrated intelligence that pervades the entire planet.” (source of quotes: Twilight of the Clockwork God, John David Ebert, pp.92;98).

I had my own experiences with this so-called Overmind when small. Repeatedly. In that sacred canyon aforementioned. And that’s all I’m going to mention here, except that if you wish to know more, start with Ebert’s book, or listen to my interview with him via podcast.

There are more things in heaven and earth, Horatio,
Than are dreamt of in your philosophy.

11 thoughts on “Journey to the Center of the Earth”