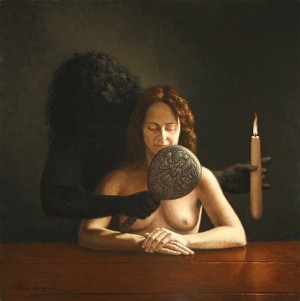 From Wikipedia: the Jungian shadow often refers to all that lies outside the light of consciousness, and may be positive or negative. “Everyone carries a shadow,” Jung wrote, “and the less it is embodied in the individual’s conscious life, the blacker and denser it is. It may be (in part) one’s link to more primitive animal instincts, which are superseded during early childhood by the conscious mind.”

It is when these ‘primitive animal instincts’ flood into consciousness, void of direction or understanding or the capacity for reflection before action, that we are in deep trouble.

Examples abound. Leaders who make excuses for war and senseless attacks of atrocity, abuse and torture for the sake of profit (and under the guise of justice or righteousness) exemplify this negation of Shadow. Their denial of motives becomes larger than life, which is as close to a holy war as America gets. It comes under the pretense of spreading democracy, but really it is for personal gain of a few misguided souls in positions of power. Many people have simply had enough of it, but feel despondent and powerless. Our democracy-as-participatory government seems a sham. Acts of desperation are often the result.

Is there anything that can be done to avert future acts of violence on a mass scale, such as happened most recently at the Boston Marathon? This kind of madness almost demands an inner confrontation in the individual. Any outer posturing is potentially dangerous. Rather than coming to grips with fears of insufficiency or powerlessness that lurk within, the unconscious among us may simply act out in whatever way seems compelling at the time. If we want to help heal the collective, we must learn to sit with discomfort until it becomes clear how, when and where to act appropriately, after grieving the loss of what cannot be grasped, either conceptually or materially. Facing what we find repugnant, we allow love to restore wholeness within ourselves. We may then begin to understand the capacity for these shadowy elements in others. Out of this comprehension emerges a more compassionate worldview, and healing begins from the inside-out.

Obviously whoever commits acts of desperation or hatred has a warehouse full of undealt-with emotional baggage. All our fellow human beings deserve our understanding and compassion – which is far more difficult to grant when they go out and destroy the lives of other people. Yet it is then, believe it or not, that these acts become our problem. Because they exemplify an aspect of our collective denial, it brings up whatever it does in and for each of us.

We are all in this together. We cheer on with great admiration our best, our brightest – and find it distasteful to observe our deepest, darkest demons out on the playing field. What we are witnessing is, in essence, our collective human drama being played out on the great, grand stage of life. A valid concern might be what role we, ourselves wish to play.

Wanderer, mystic, lover of this earth. View all posts by Bela Johnson

7 thoughts on “Only The Shadow Knows: Boston Marathon Op Ed”