Here we are, 3000 miles in the middle of the sea; not even remotely trying to be part of the mainland culture most folks who were born in Hawaii simply call America. It is enough, this melange of beautiful people whose origins always make for good guessing games. We’re all in a state of becoming anyway, individually as well as collectively. If we’re eventually morphing into a more human race anyway, love is color blind, though not everyone recognizes this yet.

Imagine a world with no racism or divisiveness, simply because we collectively finally admit that Planet Earth would be eternally boring without diversity. Imagine such an abundance of shared love that we let one another be, not hoarding what we’ve got or trying to diminish another’s largesse of spirit.

When we lived on Moloka’i over 20 years ago, we were the object of racism because we were white or haole (literally translated as life without spirit). White people do indeed appear ghostly next to the rich complexion of most Pacific islanders. So we got to learn firsthand what it felt like for millions of other people throughout the world who have suffered because they looked different from the majority of society. What an invaluable experience. And though racism is still alive in Paradise, one may observe Aloha to by far be the prevalent sentiment. The breath of life to you! How utterly refreshing.

As U.S. citizens are looking at liberties previously taken for granted with a bit more scrutiny these days, I ponder freedom as it pertains to me. I do not choose the freedom to crush others I view as potential and distant threats, robbing them of their own sense of security and serenity. I choose instead to support the liberty we all secretly yearn for in our hearts, no matter what and where we’ve come from. I choose daily acts of kindness and a personal practice of mindfulness. Being aware of my words and thoughts, this sometimes difficult practice keeps me walking my talk as best I am able.

Victor Frankl suffered enormous physical and psychological pain as a result of Hitler’s concentration camps. He later became an eminent psychologist and prolific writer and offered, Everything can be taken from a man or a woman but one thing: the last of human freedoms to choose one’s attitude in any given set of circumstances, to choose one’s own way.

What is the attitude you choose that supports your own way without robbing others of the same? How do you support this in daily living?

In Peace and with Aloha,
Bela 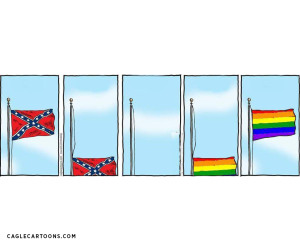 There have been many reasons these past few years to feel deep remorse as an American; things that a government ‘by the People’ should never have enacted on The People’s behalf. I could write a treatise on these assaults to our humanity, but will spare you that, at least.

In our country, lines have been increasingly blurred with regards to separation of church and state, and I am flooded with gratitude today that our Supreme Court, at least, has demonstrated wisdom in reinforcing this boundary.

Freedom to love whom we wish without legal bias can only give rise to protection under the law for everyone. It’s all I can do to sit still and write this. Consider it my virtual dance of delight.