I realize what it is, this gift I am given, it is enough, the wisdom of the word, when for others it is the peace of prayer; where to sit in meditation with this restless energy seems futile, not indigenous to the personality, and so I walk, cycle, move, contemplating flow;

One axis brings healing, profound from the intention up, the other holds the created universe, such as humans are capable of manifesting into being, in peaceful hands, fashioning useful things of lasting worth, and that gift is likewise enough;

One holds relationships higher than the value of self, whilst another overturns the moneylenders in the temple, and yet another holds visions far beyond what most are able to perceive;

Let it shine, let it stream through the fingers that type the words, let the roots settle and not strangle, tending always the ground of our fertile, living, dying existence, from one paradigm to the next.

I write, and I start; write and I stop; what can be said in these times? Only that what many consider real out there is simply not my reality. Yet how to explain this so that people don’t feel as though I am being careless or crass? The fact is, I care so much about the future of this planet and the life upon her that I cannot participate in the waves of fear that the Powers That Be are broadcasting on a global scale. Last night’s global meditation proved I am not alone. The energy was amazing; palpable. Our choice is ever to be subsumed in the old paradigm or to gather with like minded souls and unseen helpers and step into the New.

I happened upon a video last evening and watched it straight through. This is not typical of me, I get fairly bored with watching anything on my phone. And yet it pretty much sums up what I am feeling. You’ve got to get past the first questioner who is having trouble framing her queries to the hosts. I am sure she is nervous. Still, there’s content there that might be familiar to some. And once past that first five minutes or so, it gets rich fast.

So honestly? If I could say it better, I would. There have been many days in the now-distant past that I felt compelled to write and fill in some of the missing links. In this case, it’s already done for me.

Aloha, dear readers. Align yourselves and change the world. 💗 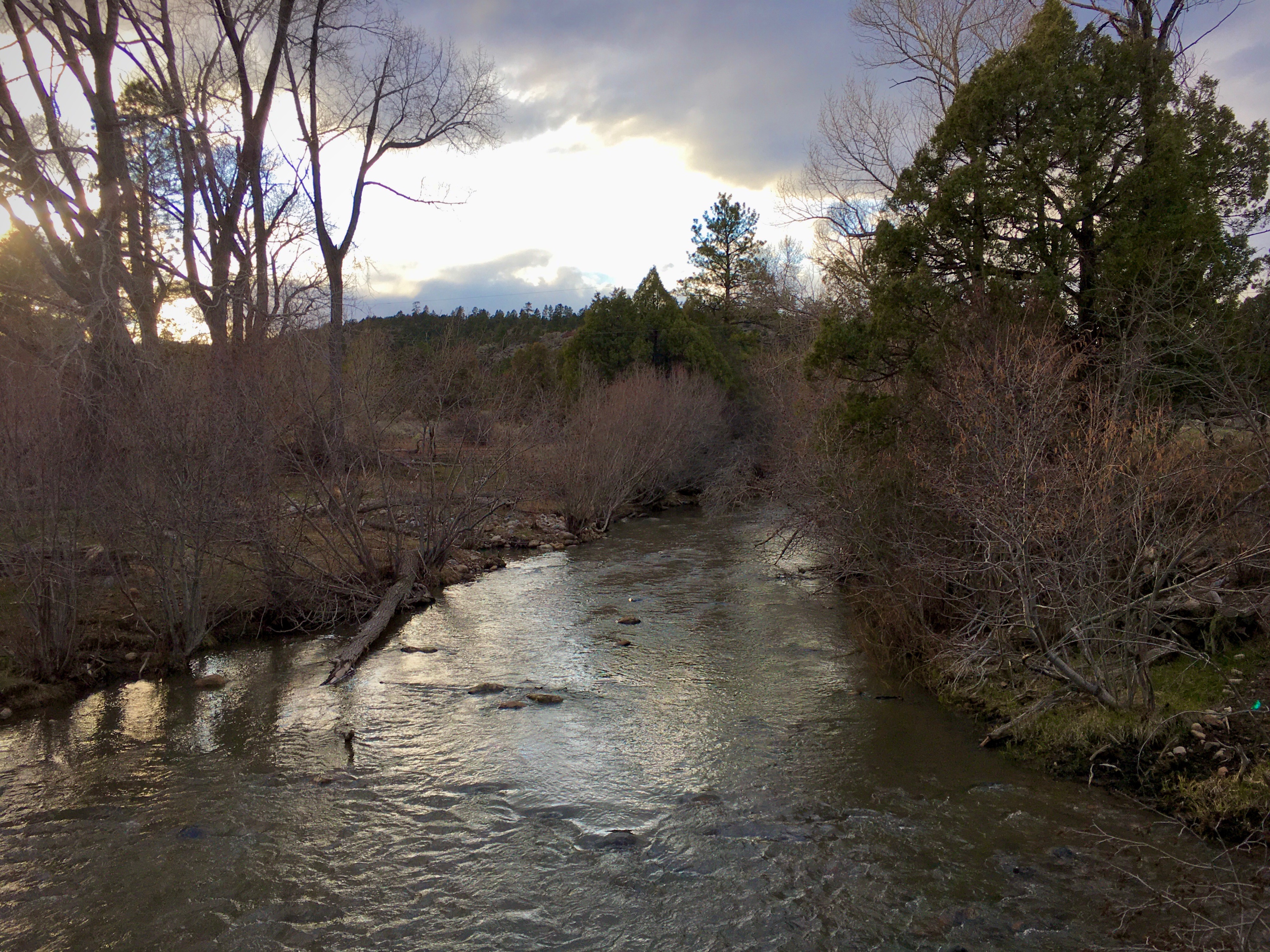 Will we be part of the madness, or will we join in a vision of a better world?

How many times has this thought occurred to you in the past few decades? Yet now more than ever, the question becomes crucial. My friend Sue Dreamwalker recommended a series of video/audiofiles a few months ago called Time of the Sixth Sun. This is a brilliant compilation of visions and voices of Indigenous peoples throughout the world. As one speaker says, we are all Indigenous to somewhere. Think about it, and you’ll realize it’s true. We may have lost our roots, but we haven’t lost the desire to belong to something larger than ourselves.

I have shared this website with many, and gifted several series memberships to loved ones, as a result. The information presented is brilliant and illuminates corners of my very being that had lights blinking on and off for a time. I am grateful to have the affirmations of many, stated in various ways that touch on each corner of what most now term Reality (which is, after all, an agreed-upon collective ‘creation’). And participants turn these corners upside-down and inside-out with their grounded earth-based wisdom. If you want to heal the earth, or more particularly our relationship to it, I know of no better compliation of work. I realize, and you might as well, that we Can be the change we want to see.

The ‘old guard’ is not going to go without a fight, the like of which is plastered across worldwide news media screens like a bloody banner these days. I always thought watching corporate news was a waste of time, but now it’s even more blatantly clear why this is so. There is So much going on, So many wondrous things happening in our world! Yet the same sources all over the world hash and re-hash the same fear-based agendas: war, conflict, politics and greedy corporate business machinations. Most of us know that political systems are breaking down left and right, making a mockery of any sort of Democracy or social justice constructs. Do we really want to play into this fantasy vision of reality? It is a choice we make with every breath we take.

Last Monday we closed on the lovely property pictured here. We are now in a position of having secured the ground for our future whilst awaiting the selling of the home we have lovingly restored from old Plantation times to its present incarnation. It’s been so much fun, and yes, a lot of work! We never planned on leaving it, so we made it our own, tropical gardens and all. You can view it here.

Still, we might have known better. Living wide open necessitates a willingness to shift and grow, both inwardly but also occasionally outwardly, at least for us. So back we go to where we lived many years ago. The high desert of New Mexico is singularly unique. And we look forward to the variety of topography and wildlife we remember from that time, as well as different opportunities for us both. Aloha for now! 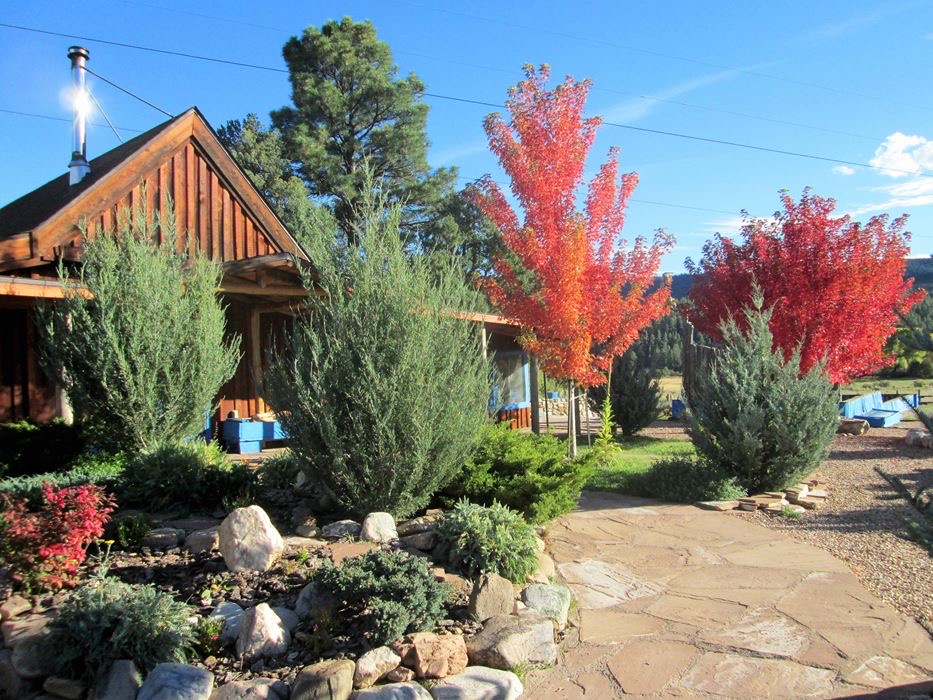 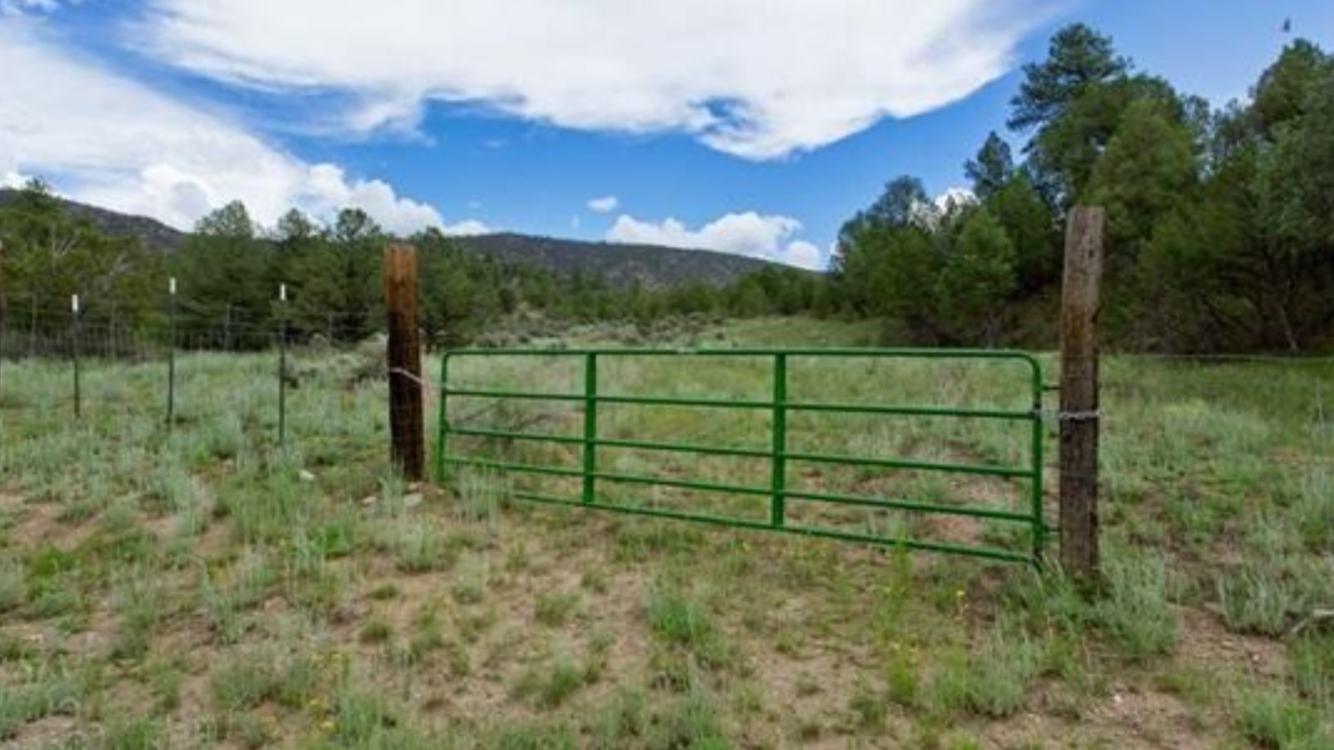 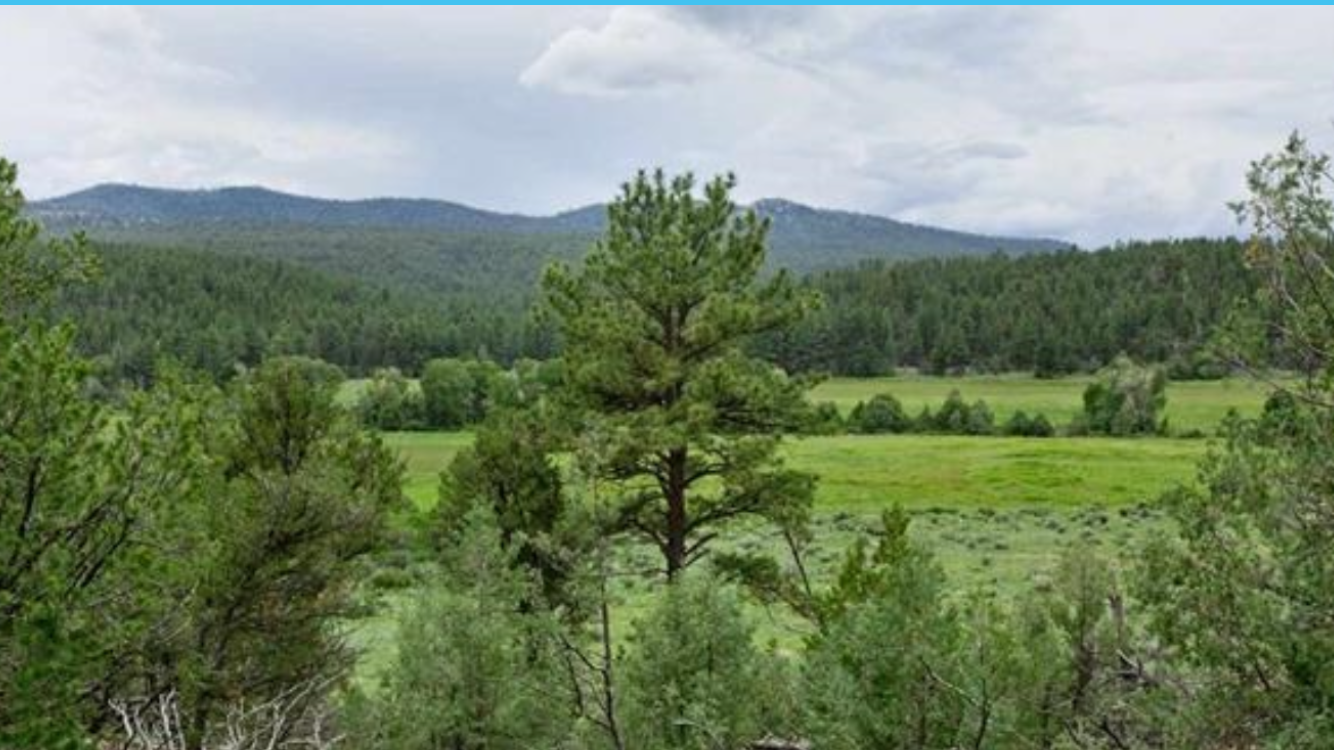 Trembling gently in twilight,
rippling like a mirage,
what seems solid during the day
becomes otherworldly by nightfall
when things left unresolved
return to haunt the living;

Important then to honor passing
dreams, full-blown stories once told
to the very young, remembering that
which they could not yet apprehend;

Take heed to flights of fancy,
diamond secrets borne upon the back,
then spilling forth and landing
like rocks from the sack. 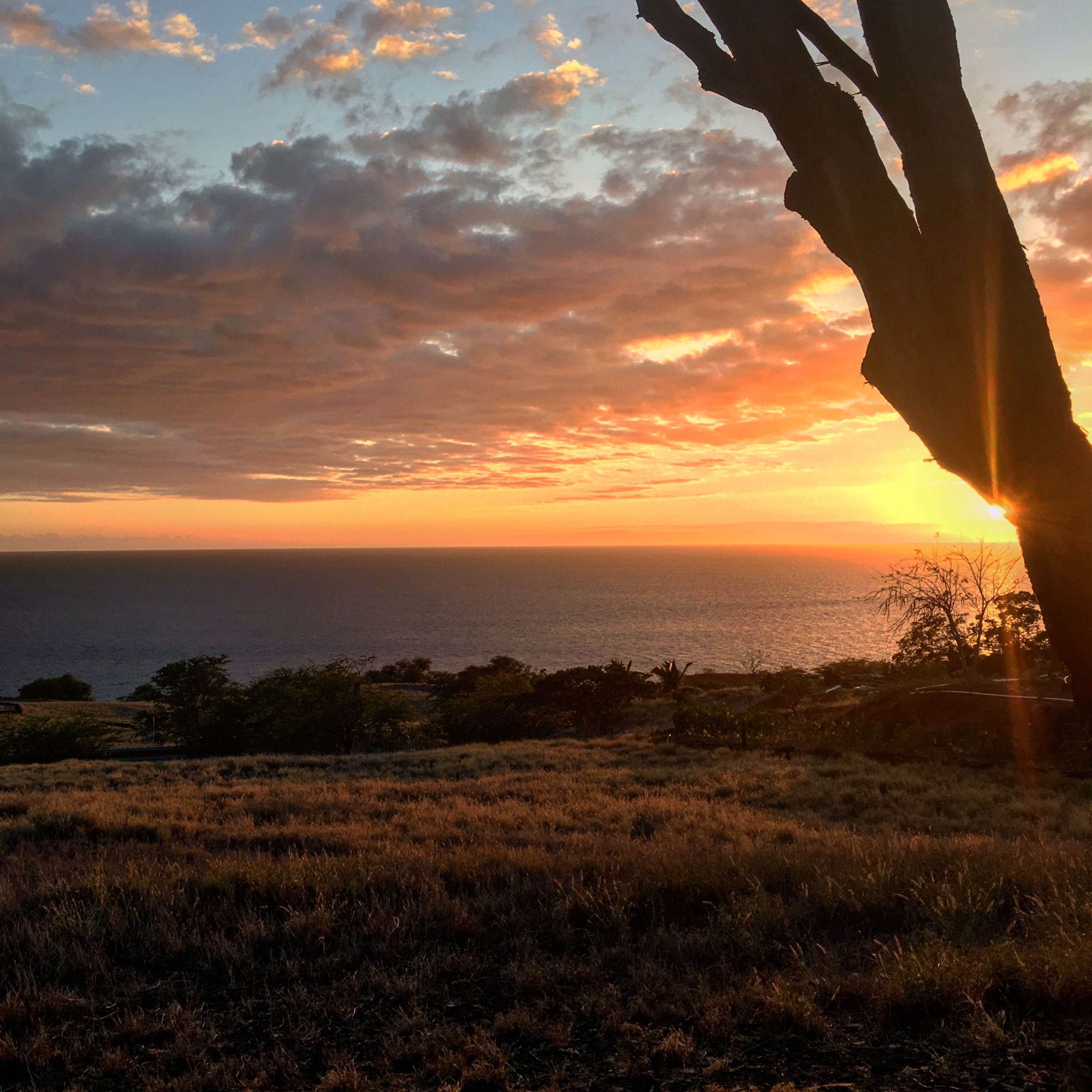 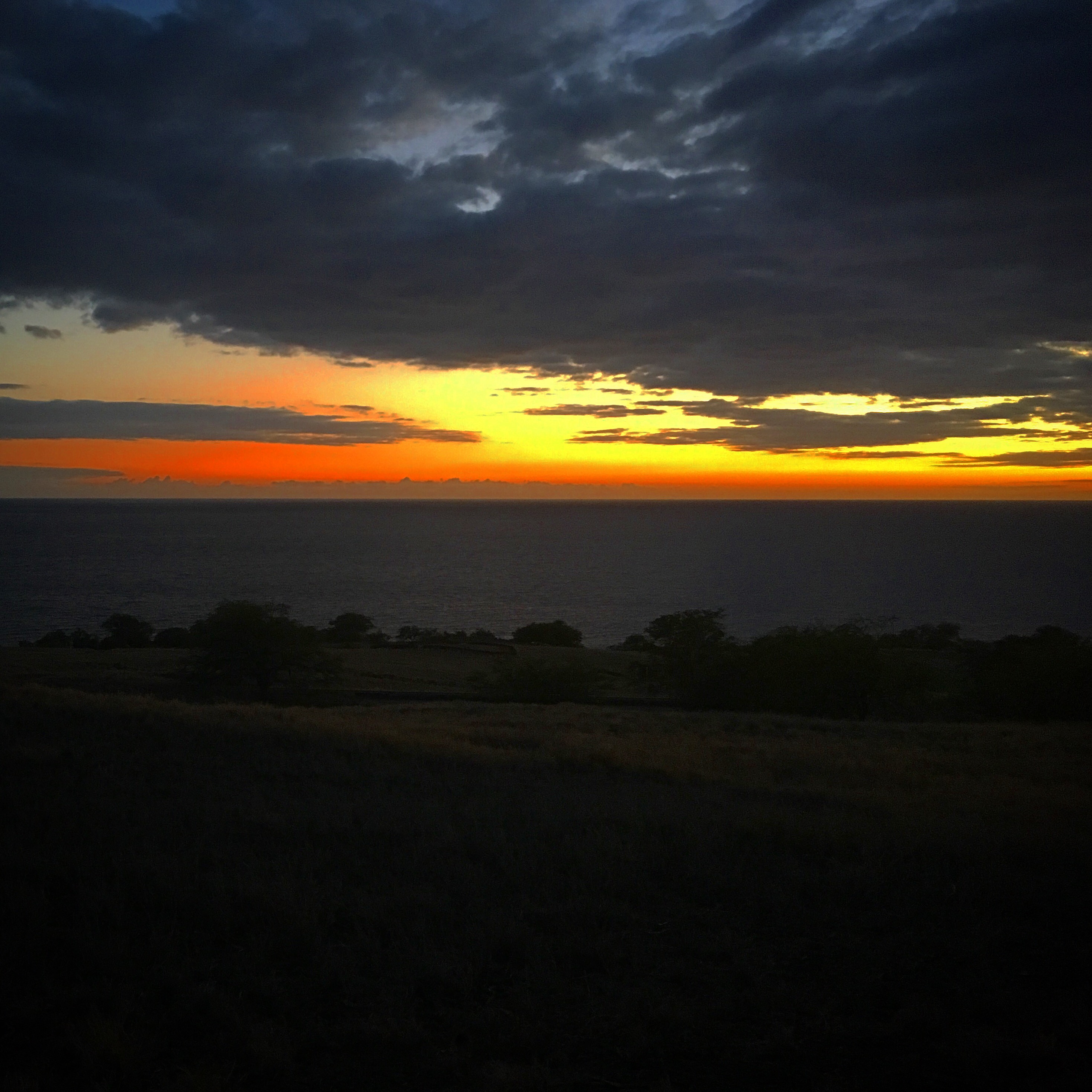 Activate, move! Directions barely registered
in that middle place between worlds;
life in the ethers more familiar, more desirable
than this constant adjusting; bold when she
should choose circumspection; equally
withdrawn when action seems desirable,
imperative even, in the face of those who wait,
feigning patience as though expecting something,
anything, while she remains frozen inside,
tears rolling down pale cheeks, filling roles
chosen by others so that she might survive
the duration of some unknown tenure;

When finally it arrives, that inner direction spills
in surges, haltingly familiar as once-bluster,
then streaming forth clear as spring water,
filling chasms in the incomplete puzzle
form she inhabits, firming up pathways once
simply perceived, interstitial patterns, linked codes
scattered randomly in pitch dark possibilities;

Some say a path is chosen, while others claim
destiny guides, yet in the end (which is likewise
a beginning), one is motivated by forces
only barely understood much less named;
so a deity arises to fill that void, our human need
to attribute, a magic mirror to ask and receive,
and all is well and right; sense is restored, proper
place and timing imbued with meaning,
while mystery, in all its splendor, endures. 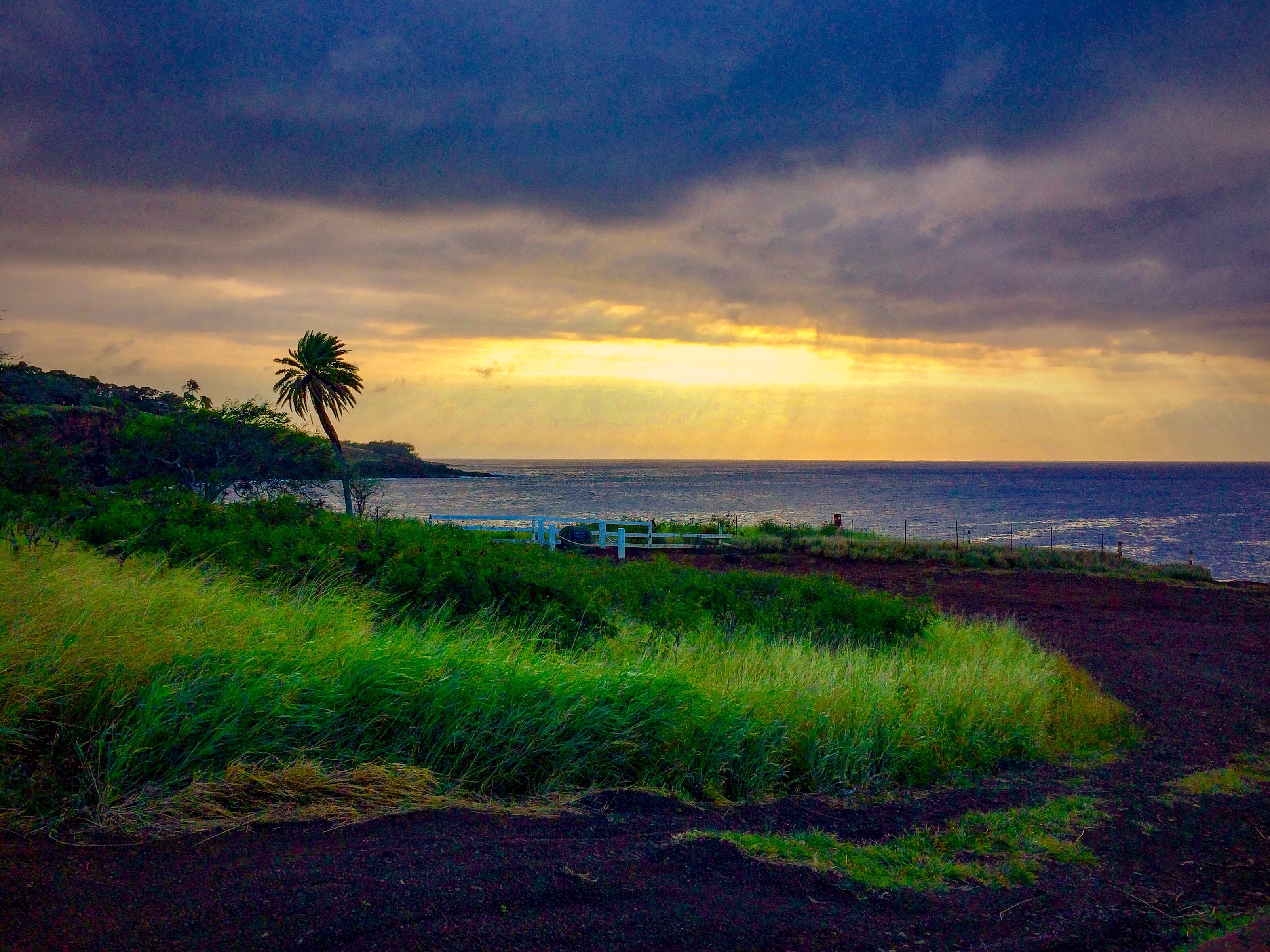 The sea rolls out and cannot pause long before
once again seeking the safety of the shoreline;
children leave home until they sprout sturdy wings
of their own, only to one day return older,
perhaps wiser, with appreciation of rootstock
and richness of the nurturing ground;

Fingers of the infinite, we jump ship and land
on foreign soil, forgetting, longing to return
to that One Magnificent Tree from which billions
of branches have cleaved;

Yet why do we yearn for reunion before we have
fully experienced the capacity and magnitude
of a multidimensional self which ever informs
the One, expanding it, enlarging its own ability
to conceive a more colorful body of light?

The world cries out for Mother;
fast food and high heels can
never get us back to hands
in earth, in soil, rich firmament
above, dark umber below; heads
in a clear azure sky and feet
on the goodness of ground;

On the ground we may feel,
can sense a pulsing heartbeat,
the oneness with all; there is
no disconnection, sky from soil,
tree from root, sentient beings
one from another, we all crave
nurture, a lasting sustenance;

We may do others a disservice
when expecting them to stand in
for the Elements, arms seem to
come up empty every time; people
leave our lives, everything changes,
so much loss and toward what end?

Meanwhile as long as we draw each
necessary breath, this dependence
automatic, the Sacred awaits our
intentional participation
in this ecstatic cosmic dance. 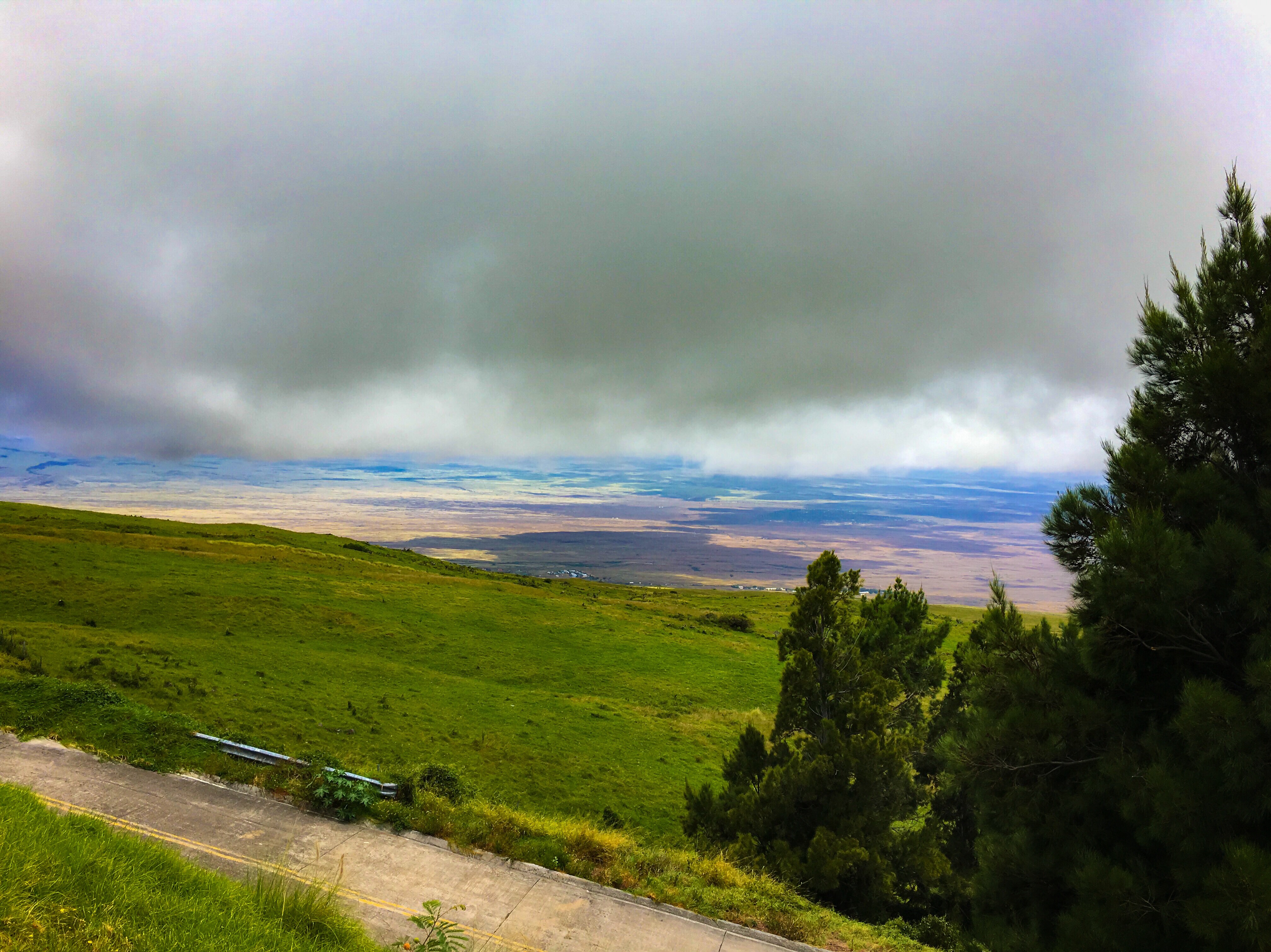 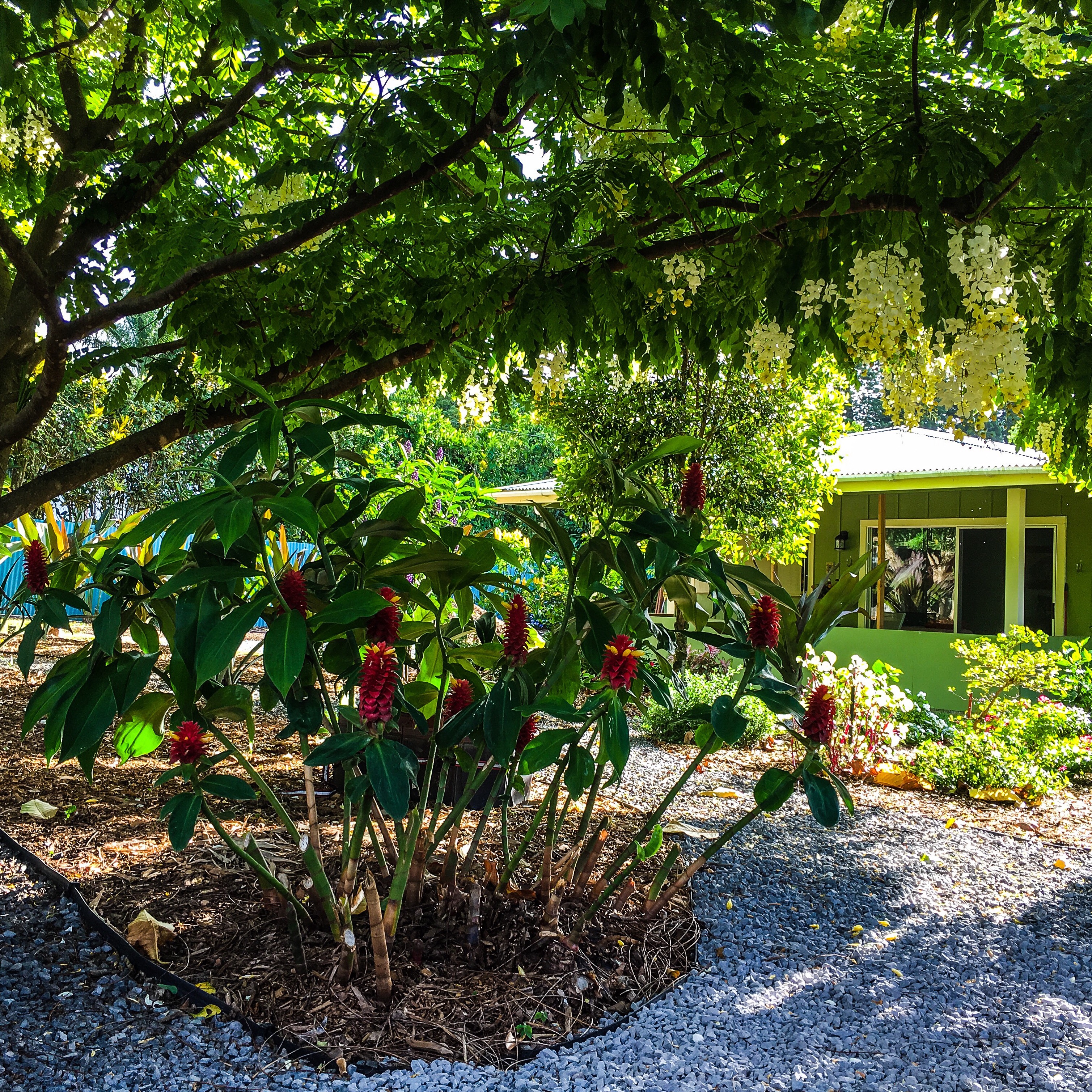 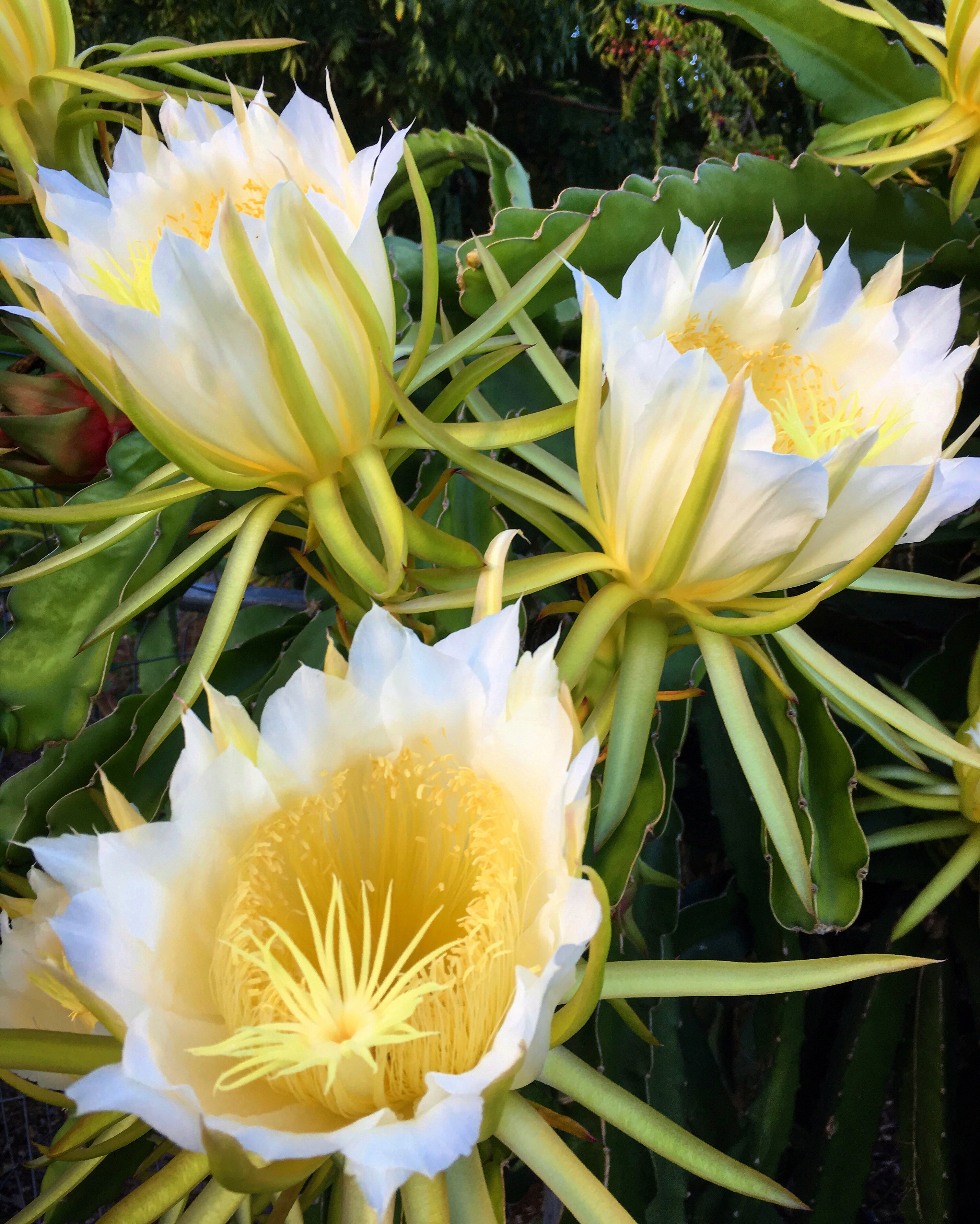 A walk in the forest reveals character,
the too-smooth perfect bark of white cedar
alongside the pocked husk of a dead relation
not yet upended, bustling home to woodpeckers
and nuthatches; mossy trunks of ancient
fir spirits, rooted then and now
in the goddess’ good earth;

Long before humans roamed these woods,
forest kinfolk called by others Druantia
visualized their own forms, gathering first
the dying limbs of relations who gathered
about in free association following
each sylph’s template, finally crowning
tops to denote distinct identities,
informing other beings who may then
behold them without trepidation
in their three-dimensional world;

Rituals practiced by the faithful remained,
in form or invisible, and as the greatest
of sacred numbers was three, a trio
of Druantia would venture forth to bless
open ground, threatened then and now
by strangers fearing to enter the dank
of their cool, dark forest home. 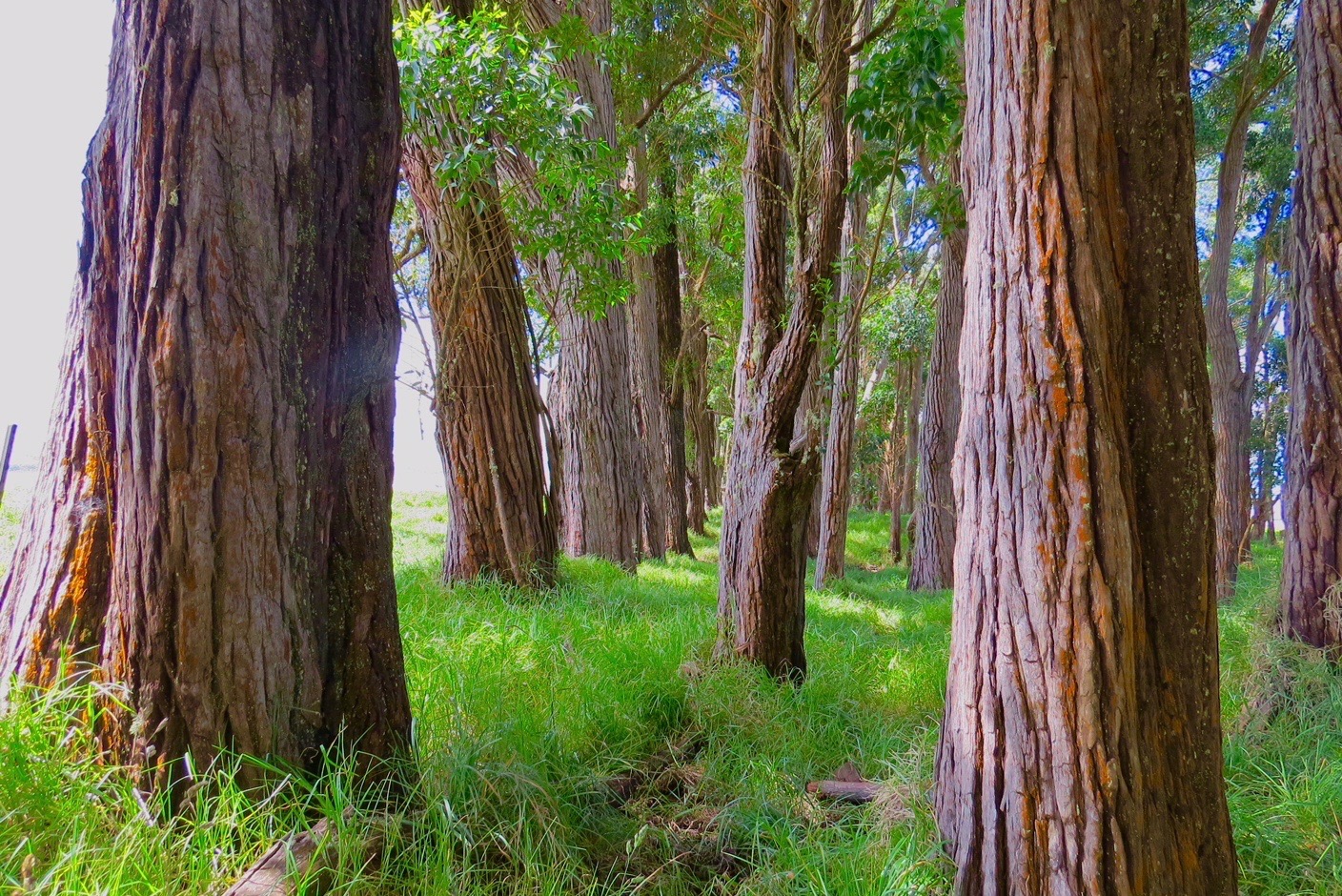 Schooled to the rigors of religion, if I took nothing else away
from those origins it was faith; faith that a child’s prayers
would be answered by forces unseen, and I took root
in that faith like fieldstone, anchoring my small body in cracks
and crevasses formed by flooding time, a snake secreting low
and tight, protection sought in the shade of midday,
giving nothing away, not a breath, shutting out the discord
of voices, dissonant sounds that soothed the ears of others
with that tinge of the familiar;

Sitting in newly-mown grass, breathing in the herbaceous bouquet,
eyes attuned to breaks in the pattern, movement underneath,
always underneath, what moved in shadow most fascinated,
pill-bugs rolling tight when threatened, millipedes threading
through miniature thickets, grasshoppers navigating the tangle,
smell of damp pungent earth drawing eyes and nose closer,
seeking level with a world unto itself, and I never ceased cringing
while watching careless feet stomping thoughtlessly upon
unseen realms, Jack and the Giant, gentry and the dispossessed,
disparity a background hum in the grace of my limited freedom;

Trudging up arid mountain trails or down into gushing streambeds
suited best, the mentholated air of eucalyptus mixing with the dank odor
of leaf mulch swirling in eddies and under boulders, fishing wet mats
out with my hands to bury my nose in that humid bouquet while the rest
of the world disappeared into a collage of confusion to which many
accustom themselves while a rupture grows like an aneurysm in the center
of the soul until that longing bursts forth like a swimmer breaking surface,
a yearning to gulp oxygen like life itself, that corporeal kinship
with the earth, a silent whisper, Return.
Return to me, and be whole.