There is an economy in words, blunted
kindergarten shears in the hands
of an earnest student, shaping patterns
already memorized in forest and field;

A poet’s dilemma as nature herself
spreads and grows, chaos becoming her
in forest and glade, streams crashing,
gushing through boulder-encrusted banks
as gnarled roots of trees wrap stones
in a thirsty quest to survive what is
to come, waning light and the crunch
of frost-encrusted gravel underfoot. 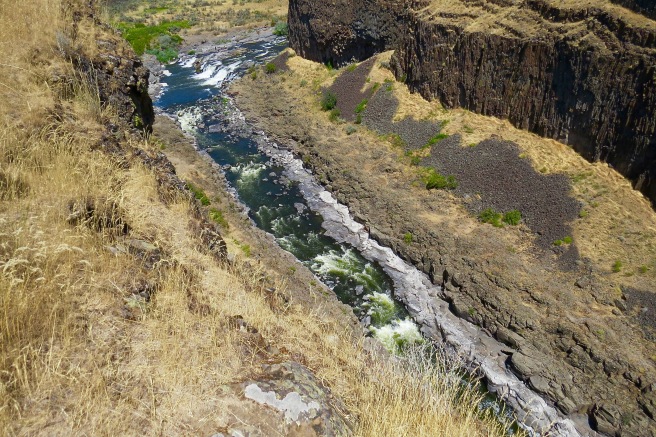 What do I want to
Do with my life?

To explore and explode
a thousand thoughts
and color-filled words
that spill out and scramble
for the page … Confusion!

It’s all I want, and
then the pictures begin
scrolling, rolling on the
insides of my eyelids
and I am dazzled
and amazed and fully
invigorated by those
visions as well;

Then I wonder about focus
and how I could possibly
slice the creative pie
I’ve been eyeing all my
life, drooling until I die
over-stuffed, never
sated.

The grit of metaphor grinds slowly,
chafing the brain until words emerge,
runaway horses on the plains of pages,
hooves pounding sentiments, grafting
meaning onto senselessness resulting,
it is hoped, in broadening context
for eyes to behold, reversing imprints
from the retina, both sides of the story
or facets of the spinning mirror ball
that is existence.

The strike of keys to paper replaced now
by snapping buttons on white screens;
still the thoughts stream onto glass
which fractures in the light of reason;
all the comely hues of morning, dawning
of ideas as horizons, split into infinity.

Quill pressed to vellum
and the raven liquid bleeds
onto the page, seeping
into parchment as words impress
themselves on minds of those
who seek elucidation;

There is no turning back
save the alchemy of fire,
while a mere century later,
fingers snap plastic keys
as a chosen cypher spins
into centrifuges turning out
multiple languages simultaneously
in a virtual world where assurance
of retrieval is never warranted;

Still we tap away, searing mots
into memories like images
of aging film stars who can never erase
a thirty year-old face from the fantasies
of future generations.

written in response to the prompt “quill:” https://dailypost.wordpress.com/prompts/quill/

All my life I’ve struggled with the spoken word. Anytime I engage in conversation, I’ve got a litany of words streaming through my head, Matrix-like, and must sort through them in order to ensure what I’m about to say lends proper weight, meaning, gravitas. At the same time, I’m aware most people couldn’t care less. But I can’t alter who I am at whim. Meanwhile I cringe as others begin drifting away, looking furtively from side to side as though they want to be anywhere but inside of this suddenly far-too-complex interaction.

While making conversation might be easy for some, consider the bane of a thesaurus-like brain. If you really can’t or don’t want to stretch your imagination, simply consider the paradox that is the (American) English language. (This should  be easy for those of you for whom English is your second language.) Although I have passing knowledge of French and Spanish, I lack fluency, though I’d like to believe there are languages out there that make it easier to say what one means and thus to mean what one says. Spoken (American) English seems facile only if one does not seek to use it too creatively.

Take for instance the greeting, How are you? Really, and I’ve found this to be disappointingly true, most folks don’t want to know how I am. Instead they simply desire the briefest of intercourse, want mirrored back to them that all is well in their world. Thus I have discovered the proper answer is simply Great! or Fine! or Fabulous! Or if I haven’t the stomach for perfidy, I can always get away with a simple Okay. (Period. Or dot-dot-dot.) More than the most cursory reply seems to hold little interest, and I can’t bear dismissive looks anyway. The word pleasantries does not really fit and yet its meaning does: inconsequential banter, though I don’t find it pleasant in the least; do forgive my honesty. I find it banal and shallow.

Consider the word discriminate. I do not discriminate based on color, gender, sexual proclivity or religious viewpoint. But I do discriminate when it comes to the quality of my interactions. If I didn’t, I’d ramble on to a four year-old about my future plans for education or my mother’s bad knees. If I did not discriminate, I might find myself in a dangerous situation. Or I might choose eggs when I really wish I would have eaten the chicken instead, though this is purely metaphor, being vegetarian these days. All this before I open my mouth.

While I strive not to judge others knowing it is unfair, if I do not judge anything about them or about myself, if I fail to have opinions about human behavior or with regard to various life situations, I’d never be able to write. Anything. At all. It’s simply the way I’m wired.

Each time I am asked, my spirit is willing,
yet somehow I still suffer from a sort of social malaise,
and I cannot name where it comes from,
save enormous overwhelm in situations
where many discover delight.

I know I may fool you, for I genuinely love people,
though I am ill suited to groups and exposure,
small one hiding under desks, trying her damndest
to remain invisible, the observer, the writer,
the introvert shoved onstage, deer in footlights,
yearning only for the quiet of forest and stream
and creatures who do not conclude.

Still I soldier on, tears streaming down weary cheeks,
attempting to share my humanity, my heart;
participating in the human dance
for the first time in over thirty years of isolation;
and when I try and stop the waters,
it’s like imploding on myself, bursts of mortar
and powder, notwithstanding.

This tearing up is not stifled emotion,
decades of mining the depths of my soul; neither is it
a call for sympathy or pity, I cannot imagine
what my own sobs bring up in you, we do not share lives.
Still, despite discomfort, I vibrate to the strings
that tether us, sensing the tremolos of repression,
and perhaps the gods in their eternal quest
for amusement simply interject
this collage of a human, cobbled together
with paste and faded construction paper
into your midst for reasons unfathomable,
especially to her.

You like it, you do not –
I really don’t care
enough to stop writing
what comes through my hair
straight into my brain,
fixing there.

When shadows collect,
fester under the skin,
they erupt like a boil
leaking poison within.
I would much rather offer
my musings to you –
even have you reject them –
than to cleave self in two.

I love the English language. Every once in awhile, a word will spill out of my mouth that I haven’t used or even thought of in a very long time. I then feel compelled to play with it. I know in writing groups, for example, there are ‘prompts’ – words or phrases a facilitator utilizes to stimulate creative flow in the participants. Since I only belong to one group here on the island, and since we only meet once every few months and write strictly Renshi poetry, I ‘prompt’ myself on my own as certain words pop into my head. Today the word is “imperious,” and the maximum length is 300 words. If you love to write but have difficulty getting ideas going, maybe you’ll find this little exercise helpful. And perhaps you’ll write your own bit of prose or poetry with this word, as a result!

She stood aloof – imperious if not dignified in a floor-length gown of seafoam hue, bellowing from her boy-hips and down around her delicate bare feet like the tide. If one looked closely, it could be determined that the hem of her garment was soiled and damp, dragged along the floor like a caveman’s conquest. Piled clumsily against the white plastered wall, undignified Louboutin heels, straps tangled and askew, dreamed of dancing.

All she envisioned was revenge – sad backlash to the sequined night’s new beginnings, now curled back and tucked into obscurity like the wicked witch’s shoes rolled up under Dorothy’s house. He had left her, cold and sulking – and who could blame him, really? She was mewling like a lost kitten, though her painted eyes, glaring steel blue through thick jet-black lashes, belied an annoying childish petulance. What he interpreted as intellect was instead a strong will, intent on capturing a golden goose.

Confident she equaled his worldliness if not his valor, he preferred women hard as ice on the outside, melting to a white light at their core under his caresses. Expecting any kind of depth from a drunken party encounter might have been a bit naïve, maybe even stupid, but this one seemed to possess it all. And he wanted that complete package as much as she herself sought to entice him into a web of intrigue. Truth is, he might have capitulated, innocent as a lamb destined for slaughter, without the fatal interference of alcohol. She simply did not know when to stop, and it was this yearning for more that he mistook as a lusty joie de vivre. It was her bottomless craving for oblivion he mistook for blind ambition, likened to his own. With her features etched upon on his memory, he sauntered home, alone and unfulfilled. 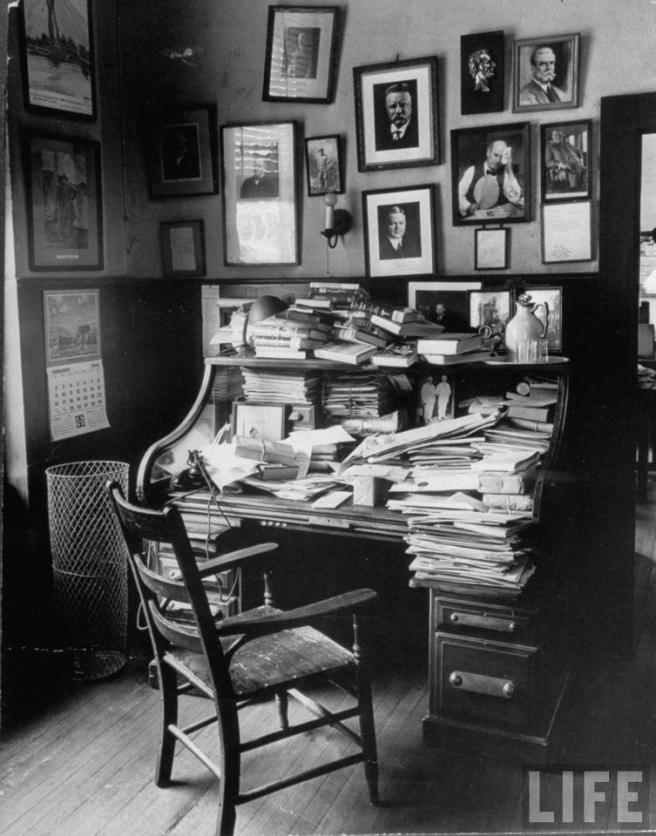 How many books can be stacked atop a bedside table? Right now there are no less than eight; the ninth is in my hand.

Is it variety I crave? Or simply that I cannot shelve what remains unread – a steady stream of volumes I’ve yet to fully digest  …

I won’t list them here, as they all change in time, to be replaced by other literary constallations of a different mood and temperament.

If you are not  a reader, this kind of sentimentality will make no sense.

If you are not a writer, it matters even less.

But if you draw inspiration from the forming of concepts through the medium of carefully crafted words, perhaps you, like I, take comfort in these sentries of the night, flanking pillow and head – imparting magic and nourishment in the space between deep dusk and the dawning of the day.